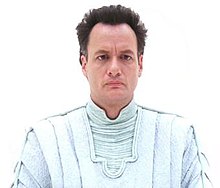 …or the slightly more amiable supplier of gadgets and weaponry to James Bond.