*As some of you know my husband is a mathematician. What you might not understand is what this means. What this means is that numbers are vitally, incredibly important to him. And when numbers don’t add up, he goes slightly unhinged. How unhinged? Well, he once spent over half an hour trying to give 45c […]

New York Slimes – by Dan Hoyt — According To Hoyt

The latest story, Business not Bullets , came from several sources – first, a long-running conversation / argument about what would actually be economically feasible to transport across interstellar distances, as drawn from current and historical examples.

In fact, there are a couple awesome, determined, crazy folks who are currently proving this concept right now. Rumi Spice is the business started by a bunch of vets who are trying to jumpstart the economy in Afghanistan, and provide income to the rural farmers – so they are selling Afghan saffron, which, even after logistics and transportation costs (and those are fearsome), still brings in 6 times the income of the next most valuable cash crop (opium), and promotes far more stability.

Whether it’s the MSM’s response to the Bobulinski claims or leftists still severing Facebook contacts, Democrats are immature narcissists. In the run-up to the 2016 election, Scott Adams often spoke about the way in which Democrats and Republicans were watching two different movies about American life.

You can blame Sarah for this, since a bit of Skype chat got the pair of us bitching about the neuron-deprived morons who proudly proclaim “I believe in science”. Precisely how one believes in a process that’s based on observation, experiment, repetition, and deduction is another matter – except that the declaration labels the speaker as the kind of fool who regards “science” as just another religion. 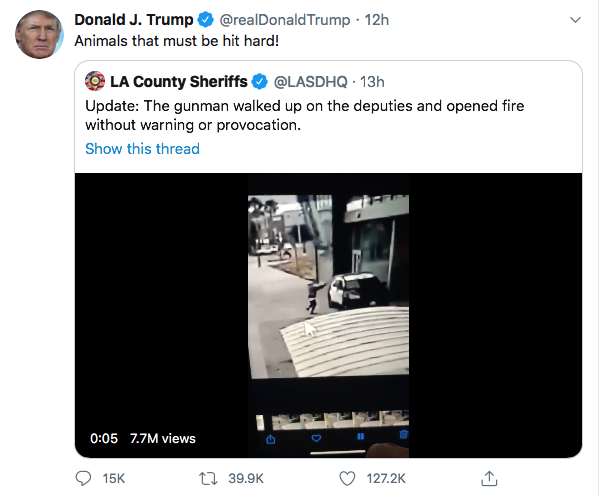 Two Deputies ambushed and nearly killed in California. There was no protest, no faux reason for outrage, no excuse for violence; the deputies were sitting in their marked vehicle.  Why does this happen?  Why is it happening more frequently in recent years?

I can’t say there’s a hill I’m willing to die on. But there are hills I am willing to walk away from with a limp.

I received my latest limp on behalf of the Proud Boys. And I’m not even a member. I just had the temerity to point out that Antifa’s archnemeses, the Fred Perry-wearing Western chauvinists, are not white supremacists.

The Proud Boys are not relying on their website to set the record straight. In Salt Lake City, Proud Boy Thad spoke ‘on behalf of the entire national organisation’, and said the Proud Boys ‘denounce white supremacy’. This was during a joint news conference with a leader of a local Black Lives Matter chapter. The international chair of the Proud Boys, Enrique Tarrio, has also been vocal about the group’s anti-white-supremacy stance.

Tarrio is Afro-Cuban and, while I don’t know how Thad identifies, he certainly doesn’t look white. If you search for photos of Proud Boy members you’ll notice that there sure are a lot of black, brown and Asian men in their ranks. Perhaps even white-supremacist groups have diversity-and-inclusion quotas.

SO USA TODAY DIDN’T WANT TO RUN MY HUNTER BIDEN COLUMN THIS WEEK. My regular editor is on vacation, and I guess everyone else was afraid to touch it. So I’m sending them another column next week, and just publishing this one here.

Source: SO USA TODAY DIDN’T WANT TO RUN MY HUNTER BIDEN COLUMN THIS WEEK. My regular editor is on vacation,…

It is an article of faith that health care providers are racially discriminatory. This is curious to me, because in my experience, doctors are at the far end of political spectrum on the left. So I tried to find research on race and medical care.

We are in the third act of an epic morality play, and the Bidens and their ally Toobin stand exposed as corrupt, sexually perverse people. Starting with the 2016 election, Scott Adams said that Donald Trump is the ultimate showman, and that he understands how to create a narrative.

What I hadn’t seen coming down the pike was Hunter Biden’s computer. Indeed, how could anyone have imagined that Hunter Biden would drunkenly abandon his computer at a little repair store; that the owner, after taking legal possession, would investigate the contents; that Deep State agencies would rebuff the owner’s efforts to turn over the contents to the government; that the FBI, having ignored evidence of Joe Biden’s corruption, would eventually send one of its child sexual exploitation experts to check things out; or that The New York Post, Rudy Giuliani, and Steve Bannon, would end up being the ones taking the story public.

Source: Two Bidens and a Toobin: Could Trump have scripted these last two weeks any better?

The Writer in Black

So there was this:

As it happens, none of this has anything whatsoever to do with the actual definition of Fascism. Fascism is a totalitarian political system with complete state control of every aspect of the economy and daily life and usually headed by a charismatic supreme dictator. The above is just a list of things that Marxists (whether cryptomarxist or actually “out”) want to complain about. But let’s take them one at a time.